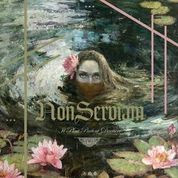 Atmospheric  sounding  synths  and  experimental  soundscapes  start  off  the  ep  along  with  some  programmed  beats  a  few  seconds  later  which  also  bring  in  elements  of  industrial  and  breakcore.  Harsh  noises  can  also  be  heard  briefly  while  voices  can  also  be  heard  in  the  background  as  well  as  one  song  also  introducing  clean  playing into  the  music. 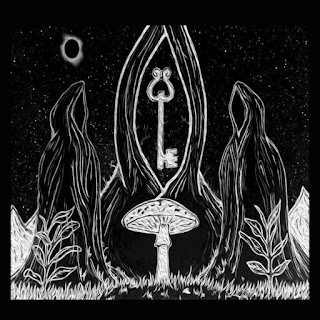 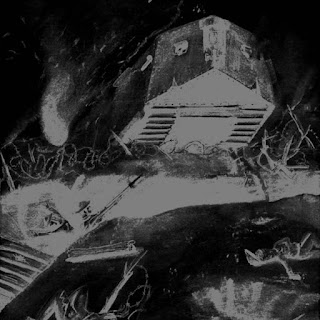 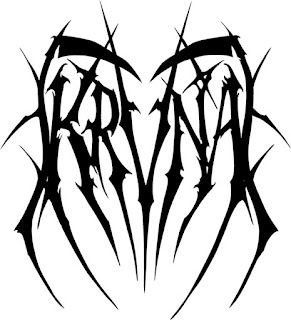 KRVNA is a solo/‘one man’ Black Metal band hailing from Sydney, Australia. After many years of musical inactivity (I have previously been involved with numerous bands here in Sydney), planets aligned, blows were dealt and the end result is the music that now begins to comprise KRVNA’s catalogue. There were numerous motivators & stressors attributed to getting this off the ground, all whilst under the obvious ‘shit show’ setting of CoVID 19. Lyrically & philosophically KRVNA explores the timeless nature of the ‘vampire’ - its mythos, origins & subsequent incorporation & influence in European/Balkan culture, superstition & folklore.

2.So far this year you have released  both a demo and a full length, musically how do they both differ from each other?

‘Long Forgotten Relic’ was released in early September, comprising two songs; ‘Gethsemane Ablaze’ & ‘Long Forgotten Relic’. ’Sempinfernus’ has five songs including one instrumental that ‘breaks’ the album up into two distinct parts. Fundamentally - ‘Sempinfernus’ is more aggressive, dark & more focused in sound & performance. My main goal is always to ensure a healthy dose & mix of melody/atmosphere & aggression; the two needn’t be mutually exclusive constructs. In summary the ratio between these extremes shifts a little, but the distinct ‘KRVNA’ sound is there in the same, on both releases - 'Long Forgotten Relic' is more atmospheric & 'open' and 'Sempinfernus'; more focussed & aggressive.

3.A lot of your lyrics cover vampirism themes, can you tell us a little bit more about your interest in this topic and also what are some of the different aspects of vampire folklore have you covered with your music so far?

Sure! As a species we are hard wired not only to attempt to understand the tangible, visible universe but also our physical & metaphysical lot, within ‘it’. We can grasp easily at the tangible experiences, at life… but the true questions begin when we consider notions of death, becoming one with nothingness & the void. I think many of humanity’s belief systems, past & present, grasp with absolute futility to fill this void - this ‘nothingness’, by imposing attributes of permanence & sentience to the human ‘soul’ beyond death; a means of compensation, of sorts.

The most fascinating aspect of the vampire mythos to me is that it also posits potential for eternal life - a re-animation of the physical being in a permanent & undead state (& in stark contrast to many other systems…) - sans ‘soul’, or sans ‘essence’. An antidote to animism, if you will… The very notion is anathema to the metaphysical and religious systems implying morality, sentience and permanence beyond the precipice of life & death.

We are left with a soulless, blood hungry, ageless killer, in a very literal, physical and otherwise transient, cold world... a being capable of destroying life in the here and now, and obliterating its need & potential, in the next.

My interest in vampires stems completely from the stories handed down to me via my mother’s family. They are Istro-Romanians, a small group of people who’d seemingly left Transylvania ~600 years ago and migrated to the modern day Istrian Peninsula. Through the centuries they’d managed to keep their language, culture and (of most interest to me) their superstitions, in tact… up until recently. Their language (a derivative of proto-romanian) is endangered & the fear is their culture and customs will soon disappear into the annals of history. I even have stories of my own mother being visited and set upon by vampires as a child (they called the vampire by name… ‘Morana’/which is also the Slavic deity of Death & winter, but this is for another time) & subsequently being cured of incurred illness from the town’s witches.

What seems ridiculous to us here in the west in modern times, was considered to be true and factual even just up to a generation or two back in time, in the Balkans. It brings to mind the saying from Stoker’s ‘Dracula’ - ‘…Our ways are not your ways…’ My lyrical focus covers numerous literal examples of vampirism throughout Europe, the genesis of the vampire mthyos, its influence & proliferation amongst predominantly European cultures over the centuries, the timeless & anti-animistic nature of vampirism, and of course, a focus on the great Count, Tepeš.

4.What is the meaning and inspiration behind the name 'Krvna'?

‘KRVNA’ is the female genitive form of the word for blood in many Slavic languages, ’Krv’/‘Krov’/‘Krew’/‘Krev’. I’d settled with the name when reading up on balkan blood feuds, or ‘Krvna Osveta’.

The artwork was completed by a close friend of mine, ‘Scourge’. He also goes by ‘Balam’ & is a very talented tattoo artist & is the singer/songwriter/guitarist in Pestilential Shadows, Rift & Varw. I’d asked if he could draw a picture of ‘The Night Attack Of Targovište’, and he came up with this monumental piece which is completely awe inspiring & breathtaking. Is there no greater show of unconscionable & vampiric force than Tepeš’ ‘forest of impaled’?

6.With this project you record everything by yourself but also have experience playing in a band with a full line-up, which one do you prefer?

I’m very much a hermit so the appeal & setting of solo/one man band wins, for me… if only just. There are obvious pros and cons to either setting. I miss collective brain-storming and creating music with peers in a band environment, playing shows… amongst other things that come along with playing in bands. Then there’s the fact that going solo allows for complete creative control over every aspect of musical & lyrical concepts. At times I see these things as either blessings or curses, depending on workload.

Both ‘Sempinfernus’ and ‘Long Forgotten Relic’ were recorded under CoVID related lockdowns & restrictions here - I want to state however this was by no means the catalyst for the creation of the music. My father’s death & a few broken bones in 2020 served as motivators for my ‘fuck you’ to the universe, haha.

7.Both the demo and full length have been released on 'Seance Records', are you happy with the support that they have given you so far?

Their total support, guidance and camaraderie is genuine & absolute, and having similar philosophies & goals makes this a perfect relationship. I love what they do, and (hope I am not speaking out of turn,) vice versa.

I’m cognisant of the fact that there are hundreds and thousands of people out there creating similar music… trying to achieve similar things. Band Promotion has changed considerably since I’d first entered this sphere, and manoeuvring the modern day minefield that is the internet and the oceans of white noise that comes along with it is challenging, to say the least. It is a one day at a time modus, for me. The demo has served as an appropriate stepping stone for the album, and as the weeks draw nearer to it’s release, reactions will be telling, I’m sure. I’m remaining pragmatic, though, but welcome listeners to the music that is KRVNA, regardless.

9.What is going on with your other band 'Dearthe' these days?

From my understanding, at current, not a great deal. The releases were well received & that is always welcoming. All other members are involved in subsequent bands that involve greater attention & energies at current, but I would most definitely be speaking out of turn as to posit any future moves or releases by the band!

As I’d stated previously I’m enjoying focussing on the day to day, at current. All of this activity comes at stark contrast to what I have (or more to the point, haven’t) been doing over the past decade. Having said that though, I am currently working on the follow up to ‘Sempinfernus’, as we speak.

I’d made a conscious effort to reduce the amount of music I was exposing myself to whilst writing both ’Sempinfernus’ & ‘Long Forgotten Relic’. I wanted whatever I’d managed to pluck from the ‘ether’ to be as unadulterated by external influence, as possible. However, I think it’s pretty obvious that my sound is deeply rooted in the realm of 90’s Black Metal, to be sure.

Despite all of this, bands that currently interest me are (of course) Nazxul, Drowning The Light, Pestilential Shadows, Ichor, Varw, Rift, Ignis Gehenna, Tyrannic, Orbysmal, Auld Ridge, to name a few. As for classics - Beherit, Bathory, Abigor & early Deathspell Omega provide me with more than enough to listen to when I’m feeling nostalgic… I like to keep it simple.

12.Do you also have an interest in Occultism?

It might be obvious that by now the answer should be a ‘yes’. Death is the greatest & last true taboo, and musings over this mysterious biological and prospectively metaphysical phenomena interests me, greatly. With time and age you’d think interest could plateau or wane, but I think the closer we walk toward that precipice between life and death & the more we personally experience it, the more fascinating all attempts to rationalise death & experiences surrounding it, become. Seemingly, attempts to marry forms of thought and any potential pantheistic musings always end with more questions than answers, but this is the nature of ‘the Great Work’.

Anything… to reduce or minimise the daily existential dread that crushes the psyche, I suppose.

Which leads me to my next point. I am a firm believer that philosophically Black Metal must be a completely negative and destructive force waged against all forms of life and matter. The vampire - soulless, anti-animistic & metaphysically anti-optimistic provides us with the perfect, eternal creature capable of outlasting life, gods… crossing religious boundaries, cultures & superstitions  - & subsequently providing modus for the destruction of potential for good in both the current physical world, and any prospective spiritual world we may or may not encounter… in the next. It is under these guises that KRVNA exists.

Sure, thank you for the opportunity to discuss KRVNA, ‘Sempinfernus’ & Long Forgotten Relic’ & hope that readers take an opportunity to listen… and finally, keep posted, there is more coming your way! 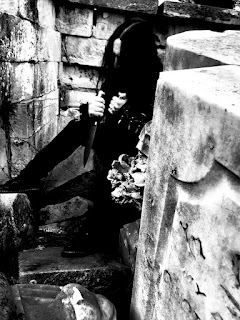