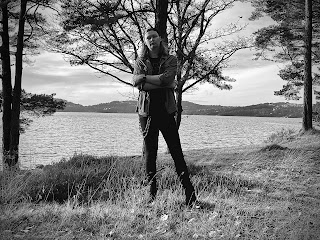 - KAS is a project I started writing music for a few years back, after being introduced to the metal scene, and I figured its time to record the music I have written and release it. I wanted it to be a easy and cheap-as-possible type of thing, as the budgets are low due to the pandemic situation we all are in now. So I bought some equipment and started calling friends in the music scene.

2.In December you have your first full length coming out, can you tell us a little bit more about the musical style that you went for on the recording?

- I find it hard to describe what kind of genre and style the record as a wholeness is, and the style sort of comes by itself, with what I listen to, with what I play in other bands. It has some black metal, some doom metal, some gothic metal, some hard rock elements - but in the end its just heavy metal music that I love. It goes soft, it goes hard, its nice and its dirty, kind of like life itself.

3.You also participate in 'In The Woods' a band that has a long history and were part of the second wave Norwegian black metal era but also went into more of a progressive direction the last 20 or more years, what was the decision behind bringing back the black metal elements into your new project?

- Well, if it had not been for ``In the Woods…`` this project would never happen. It was my entrance to explore a much darker world of music, and when it comes to black metal and the elements that make it, I long for the dark mysterious riffs and sounds. Im not a technical player, I could never play advanced death metal and ``super-shredd-stress``guitar, because its not who I am, Im sure I could learn it, but I find it way more giving not to. I like exploring with the sounds of a chord played different ways, the riffs and melodic leads. Some of the bands I listen to are great at creating space, and that is what I try on some songs of this record. Make it dark, heavy, mysterious and slow. But not to slow…

4.Can you tell us a little bit more about the lyrical topics and subjects that you explore on the new release?

- Well, Willie René Skåtun (AKA V-REX) and Jan Åge Lindeland wrote the lyrics that they perform on the record, they are wildly different, and I will say that V-Rex takes on a much more sad darker life, the things that are lost. He writes very passionate and beautiful, but filled with a darkness I couldn’t even imagine. Jan Åge wrote to sets of lyrics, and they are incredible. They need a good reading, you find them on Bandcamp. They are very raw and dark, very suitable for the music in those certain songs. The two other sets of lyrics I wrote myself, and ``This is Goodbye`` is very personally to me, and is written in a dark set of mind, its about letting go, letting go of your past, the choices made, the life lived. ``The Problem of Evil`` is just that, ``is it God or the the Devil?``

5.What is the meaning and inspiration behind the name ‘Kas’?

- I wanted another name, but it was long and I though I wanted something easy, often long brandnames have a shorter version of their name, for example we use ITW for In the Woods, and I couldn’t find one that was suited for the name I originally had planned, so it became the initials of my name.

- The artwork is ``The thinker``, the sculpture by Auguste Rodin, which was first seen in his work ``The Gates of Hell``, in a modern urban situation. You see him in a typical back alley floating with trash. There’s also a secret message on one of the papers in the air above him.

7.On this album you record a lot of the music by yourself but have experience playing with a full band, how would you compare the two?

- Easier. You are your own boss, but you loose the connection you have as a band. But with the right people involved I think I made it groove and sounding good. Being my own boss is a blast, and I like to be in control of things, not being a control freak, but I like to know what is happening at all times with the band, business and creatively, and with my own project I have just that.

8.On the new album you also have a few quests, can you tell us a little bit more about who they are and also their contributions to the recording?

I asked some friends to be with me on this, and everyone but one said yes, so I am very pleased with that. I got in touch with a drummer from Mexico, Hector Montero trough Facebook and we just started talking and suddenly we had drums on 2-3 songs, and then we did the rest. He also did keyboards on most parts, where I didn’t. I also have Kjetil Nordhus and Stein Roger Sordal from Green Carnation on the same song, vocal and bass, as in GC. I asked Jan Åge Lindeland from Blot and Mental Disaster to do two songs, he wrote the lyrics and vocals for those. I also asked V-REX from Arvas, and he ended up doing two songs as well. I was also in touch with Nargaroth for vocals on one of the songs, but due to covid and low budgets that didn´t happen. I also have the very talented Caroline Salmona doing violin on ``This is goodbye``, and they are very good. I have my close friend James Fox sing a few lines on ``The Problem of Evil``, and a man named Giuseppe Taormina laying down some ambient sounds on one track. All in all there is many people involved, and there could have been way more.

I am unsigned, and looking for a label. I wasn’t sure if I would manage to pull this through without, but luckily I did. I sent some emails, but nothing took bait unfortunately.

10.On a worldwide level, how has the reaction been to your music by fans of black and extreme metal?

- I have been very secret about not sharing much of the songs before the release. There are only a few people that have heard all the songs, so I am not sure. I have gotten nothing but good feedback after Lost Love was released last friday, so I am grateful for all the love for that.

We are working on a new album with ITW, and hopefully some more touring and after that I will record the second album of KAS. Its already in writing process, so hopefully that will end good. I also want to get a bit more involved in mixing and mastering in the future, and develop my producing. But I am in the scene to stay, who knows what the future will bring.

When I started out playing guitar in 2009, it was Uriah Heep that was my band, then I discovered Guns N´ Roses and I started a rock n roll band with my friends. Rory Gallagher, Slash, Jimmy Page, Jeff Beck are my big guitar inspire.

And in the metal scene, of course In the Woods, Green Carnation, Agalloch, Deafhaven, Watain. Dold Vorde Ens Navn is also a fantastic group.

Today I am listening to old Swedish ``punk``, Imperiet.

Thank you for the support, and to all those reading this, hope you enjoy ``The Problem of Evil``. 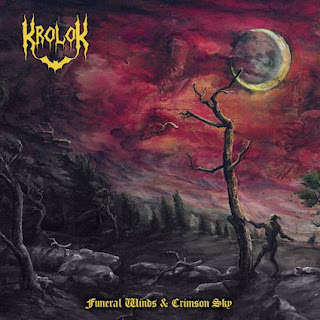 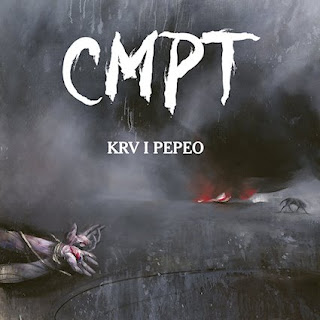 On  this  recording  Cmpt  remains  true  to  the  raw  and  atmospheric  style  of  pagan  black  metal  that  he  had  established  on  his  previous  release.  The  production  sounds  very  dark  and  raw  while  the  lyrics  are  a  concept  album  based  upon  the  ritualistic  side  of  dark  Balkan  Sorcery  and  it's  spiritual  offering  to  the  ancient  cult  of  Death. 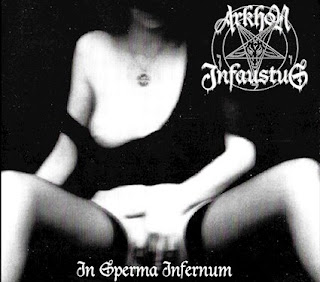 On  this  recording  Arkhon  Infaustus  brought  in  a  very  raw  and  satanic  mixture  of  war,  black  and  death  metal  as  well  as  being  mostly  focused  on  the  blackened  side  of  the  style  back  in  the  earlier  days.  The  production  sounds  very  dark  and  raw  while  the  lyrics  cover  Satanism,  Blasphemy,  Sexual  Perversions  and  Depravity  themes. 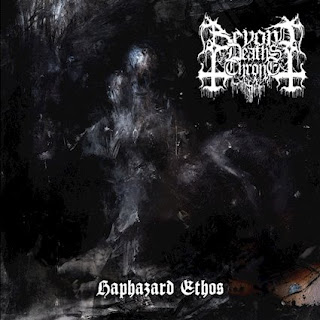