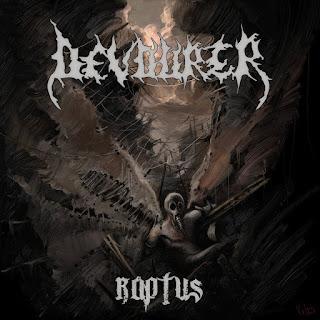 Spoken  word  parts  van  also  be  heard  on  a  couple  of  songs  along  with  some  of  the  music  also  bringing  in  elements  of  death  metal  and  growling  vocals  which  is  also  different  from  previous  releases  the  band  has  put  out  in  the  last  few  years  and  as  the  album  progresses  a  brief  use  of  atmospheric  sounds  can  also  be  heard  The  production  sounds  very  professional  while  the  lyrics  cover  Darkness,  Death  occultism,  Anti  Religion and  Existential  themes.

1.Can you give us an update on what has been going on with the solo project these days?

A:  Invultation is currently working towards becoming a live entity at some point this year.  I have some other musicians lined up and we are rehearsing a mix of material to hopefully bring this filth to the stage sooner than later.  Also there is another album, a follow-up to “Unconquerable Death,” to be released sometime this year via Sentient Ruin Laboratories.

2.Your last release was in 2021, musically how does it differ from the stuff you have released in the past?

A:  “Unconquerable Death” is a little bit more polished, in terms of production, and overall influenced by a greater variety of personal favorites.  On that album I tried to branch out a little bit and try a few different things vocally as well as in the song structures.  I don’t know that it differentiates itself from previous releases all that much but I’m always trying to bring something different to each album instead of repeating the same formula.

3.From 2015 to 2020 there was no music being released, can you tell us a little bit more about what has been going on during that time frame?

A:  After the demo was out I continued to work on new material for Invultation but became busy with my other projects, namely The Wakedead Gathering, LONGBARROW and Echushkya, and had some major personal changes going on in my life at the time.  Eventually when I found time again I revisited the songs I was working on for “Wolfstrap” and decided to scrap them all and start over, so it took a bit longer than anticipated.

4.You are also involved with other bands and musical projects, what is it that you bring into the music of 'Invultation', that you are not able to do with your other groups?

A:  Invultation is about pure hatred and blasphemy and is tightly focused on these aspects of humanity.  My other projects are more experimental in ways and tend to venture into musically progressive and melodic territories that Invultation simply never will.  It is my outlet for expression of pure violence.

5.Some of your lyrics cover Lycanthropy and Luciferian Magick, can you tell us a little bit more about your interest in the dark arts?

A:  I have always been fascinated with the idea of an “other” or “forbidden” form of magic and when I began reading more about Luciferianism I knew that I had stumbled upon something that could merge into my personal philosophical views.  The belief that the self is something to be venerated and not eliminated is, in itself, a magical discovery for most who venture into this area of the occult, but always with the knowledge that it means something different for each individual.  I view the history and concept of Lycanthropy as a great metaphor for the transformation (or regression) of humanity into its more bestial and instinctual form.  With my answer to your previous question, what would be better to symbolize the meaning behind Invultation?

6.What are some of the other lyrical topics and subjects you have explored so far with the solo project?

A:  “Unconquerable Death” is a bit different lyrically from the demo and “Wolfstrap” in that it largely deals with the idea that death is inevitable and no living being can escape its reach.  Along with that theme, I focused on the idea of undeath as well and what it means to “come back” in a physical and spiritual or magical form.

7.What is the meaning and inspiration behind the name 'Invultation'?

A:  When I was searching for a name that would fit the theme of the demo I stumbled across some old texts about witchcraft in the States that used this term “invultation” in regards to using a likeness of someone (ex. a doll, effigy) and inserting pins in it or burning it to cause pain to the individual being targeted.  Kind of like what people think of as a “voodoo doll.”  The name refers to something specific and conveys the point of the music incredibly well.

A:  Well, if you’re referring to “Feral Legion” then it is a piece by Nether Temple Design, who also did the artwork for “Unconquerable Death.”  I wanted something different than the usual black/white/red cover you see for most “war” metal or bestial black/death releases and I think he nailed it.  The new album returns to the lycanthropy theme on a larger scale and the intensity is evident in the cover art.  There are some other surprises in the layout of the new album that you’ll just have to see for yourself when the time comes.

9.With most of your projects you record everything by yourself, are you open to working with other musicians or do you prefer to work solo?

A:  Yes, I’m open to working with other musicians and I have been in and out of full bands over the course of my time as a musician.  So, I’m no stranger to working with others.  I just find that when it comes to writing and recording, it works better for me to have total control over the process.  But, like I said earlier, I am working with several others to bring forth a live version of the band soon.

10.On a worldwide level how has the reaction been to your music by fans of war and bestial black/death metal?

A:  Overall it has been a very positive reaction, in my opinion.  I am continually pleasantly surprised and very appreciative of the amount of fans purchasing my music or sending positive words about my work.  The response has definitely fueled my desire to keep pushing forward with Invultation for as long as possible.

11.What is going on with your other musical projects these days?

A:  The Wakedead Gathering should have a new album out sometime this year.  It has been in the works since 2015 and is long overdue but there have been various setbacks, largely due to my own fault, that have kept it unreleased thus far.  There will be a new Echushkya album out this year as well.  I am in the process of writing lyrics and only need to record vocals for it and the recording will be done.  LONGBARROW is, for the time being, dormant.

A:  I’m not entirely sure where I will end up but I hope to start playing shows again and continuing to increase my knowledge of the recording and mixing process as well.

13.What are you currently listening to nowadays?

A:  Great question and a difficult one to answer, unless you have several hours haha.  My favorite bands at the moment are: Gravesend, Savage Necromancy, Cenocephalus, Cerebral Rot, Funeral Chant, and I enjoyed that new Archgoat album and the new Negativa album is up there for my favorites of the year so far.  Honestly, there are far too many bands to name and I’ll for sure leave someone out if I were to list them.  Suffice it to say that I’m always listening to new music coming out and discovering bands that deserve a lot of credit for keeping death and black metal alive.

14.before we wrap up this interview, do you have any final words or thoughts?

A:  I just want to thank everyone who has supported Invultation throughout its existence and the great labels and artists I have worked with to take this project to the next level.  Be on the lookout for some guest appearances I have on some new releases coming out this year…  And finally, thank you for the great questions!  Hail death! 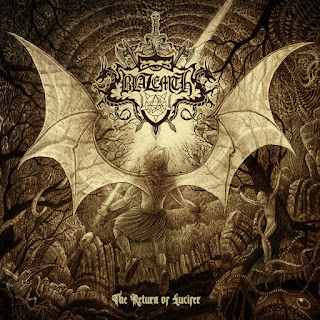 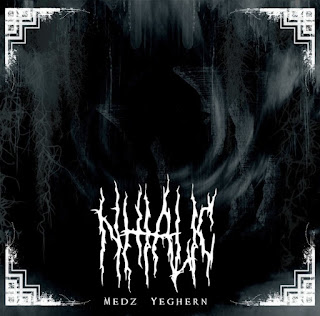 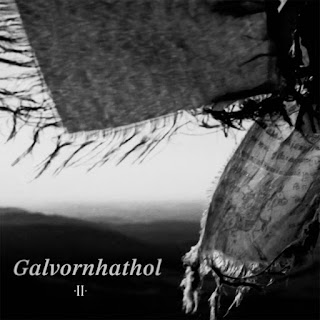