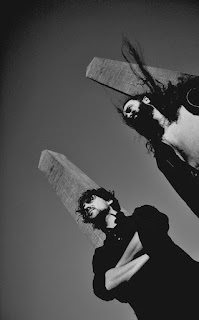 Ergholae Somptator is a metal duo. Honoratus plays the guitar duties and Jérônymous the drums, we both howl dark poetry in our native langage. We started in south of France circa 2013 and released pretty quickly by our own a demo called 'Raptus du fané', then the mini-album 'Morendo jusqu'à la fin'. Our first album 'Eau ardente' was released last year through Marwolaeth records. We create a difformed black metal full of rawness, energy, avant-gardism, chaos and creativity.

2.You have a new album coming out towards the end of November, musically how does it differ from the stuff you have released in the past?

It differs in every steps of its creative process. It is based on an intricate dialogue between the guitar and the bass parts whereas its predecessor was built on layered guitars and sheer rawness. We changed our way to compose and also our production. The first album was recorded and mixed by ourselves with our own material while 'Mille vertiges fondent sur les âmes vides' was recorded, mixed and mastered in a studio by a great sound engineer.

3.What are some of the lyrical topics and subjects you explore with the new album and also how would you describe your progress as songwriters over the releases?

We use to write our lyrics as poetry. We speak mainly about human, time and nature. The new album explore these themes once again, with darker feelings. The theme of fire is also very present.

We develop on that album a new approach for the singing, we thought about the singing parts and the lyrics before the instrumental were completed, whereas on 'Eau ardente' the singing parts were made after everything was written. Another difference is that this album was created around several rehearsals.

4.What is the meaning and inspiration behind the name 'Ergholae Somptator'?

These two words were created on purpose to describe our duo. We wanted something rather unusual and strange, with dead language sonorities. By chosing abstract words, we avoid restricting our music with concrete images.

As we said, there is a thematic leitmotif on this album around fire, the one that attracts people, that make them flee or consumes them, summarise by the Latin verse In girum imus nocte ecce et consumimur igni highlighted in the album inlay. The cover is quite abstract but it comes from images that relate to fire. We also created a logo especially for this album, which tie the name of the band to the name of the album in a single impulse.

6.Currently there are only two members in the band, are you open to expanding the line up or do you prefer to remain a duo?

Ergholae Somptator is and will stay a duo, but we eventually call some external musicians if we need. For example, there is some trumpet on 'Morendo jusqu'à la fin' that we weren't able to play, so we called for help.

Also, on 'Mille vertiges fondent sur les âmes vides', the bass has been played by another musician for releasing ourselve from that duty during the studio recording. The musician played exactly the bass as it has been wrote.

For playing our new album live, we will need a bass player.

7.The new album is going to be released on 'Code666' how would you compare working with this label to 'Depressive Illusions' and 'Marwolaeth Records' your previous labels?

It's a new experience. What Code666 propose for our music is bigger, wider, and on a totally different level than our previous releases. This is a logical consequence to us because we wanted to push this album on a higher dimension. So we are very satisfied of how the things are evolving.

For the few who notice our existence, we got great reactions and very positive feedback from various countries.

Surprisingly, we seem to be more known outside France, when we thought singing in french could have reached the french speaking public better.

We have a lot of wishes and ideas. We are aware of what we want and we know what we do. We take each release as a new playground, so our music will always see some evolutions or changes, but this will always be true to our black metal mark.

All the music we listen to have an influence, in a positive or negative way. We haven't exactly built ourselves listening the same metal styles, so this participate in creating the singularity of our music.

Honoratus has a lot of Devin Townsend on his playlist recently, Jérônymous is more into Camille Saint-Saëns.

Thank you for this interview and the review. 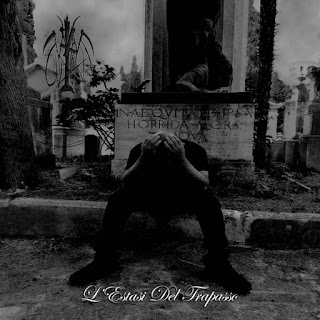 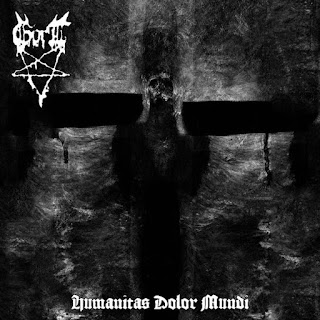 On  this  recording  Gort  remains  true  to  the  raw  and  misanthropic  style  of  black  metal  that  they  have  established  on  previous  releases.  The  production  sounds  very  dark  and  raw  while  the  lyrics  cover  hate,  war,  destruction  and  misanthropy  themes. 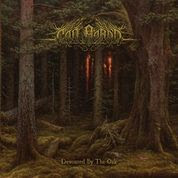 Nature  sounds  start  off  the  album  along  with  some  dungeon  synth  style  soundscapes and  synths  a  few  seconds  later  which  also  mix  in  with  the  heavier  sections  of  the  songs  at  times.  Stringed  instruments  can  also  be  heard  briefly  while  some  tracks  also  bring  in  elements  of  folk  music  and  melodic  chants  are  also  added  on  one  song. 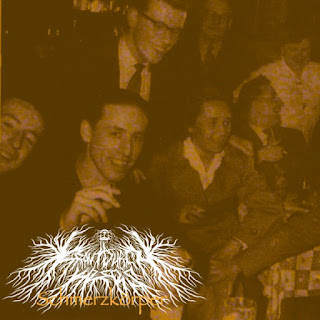