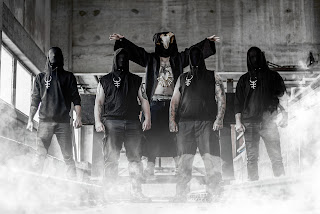 > 1.Can you give us an update on what has been going on with the band since the recording and release of the new album?

What has going on with the band in this time? Sadly Covid 19, like everywhere. At first we have to tell the people that between the recording and the release a lit of time went by. In the end it had been taken close to 2 years between these points. At the beginning with the pandemic we took it really good, worked a lot and prepared for the studio. Beside that, we planed a tour for the release and then everything went worse and more worse. We had to cancel shows, we had been not allowed to practice together and all so on. And also we had to split up the studio times and work inside the studio. That was a hard part and when the recordings where done, none concerts had been allowed and with all this chaos, the motivation went down inside the whole band. But we always went on as much as we could. Last year times had been more easy then, we could had band rehearsals again, had a just a few, but extremely great and also big shows. The rehearsals got more, the motivation and the feeling for „Boötes Void“ came back to us all, we changed our bass player and finally are on a good way to finish the songwriting fort he next album.

It finally went and sounds like the Vision we have of „Boötes Void“. It’s like always, the longer you create music in a Band, you do that process more „together“ and more structured. And all grow together with the music, so the music grows. You will hear the same, when the next album will be done. It’s a moving process and the more you do, the better it gets or also the more easy is the teamwork behind it. Musically also the first idea and songs of the band until now. This time the drummer and the guitarist worked more together at creating a song, than before. We figured out a concept behind this CD and started making that come true. The songs came out more dynamic, more like all  compare together and created this time more „Sound“ of Boötes Void. At the first EP we started writing the songs, way before all musicians where found fort he foundation oft he complete „band“. So you will hear an evolution within the band.

> 3.The lyrics the new album cover the various pagan and occult holidays, can you tell us a little bit more about more about your experience working with and exploring these days?

Hahahahaha. Bad question for me, cause when I started with it, I thought it would be more easy and I hated it within the process. When I started to think about a concept for the the album, I thought to get not too far away from the EP before, but with a little bit different face. The idea behind Boötes Void was always the connection of humanity and nature. And all the myths and occult stuff from older times. So I started to get more into known with old european folks and tribes in europe. Then I searched more about the Celts, cause of their Calendar and the festivals within this circle. The Festivals impressed me, cause there is always so much energy between humans and nature. Some are darker, some are more friendly. But all have some rituals and a connection to a higher energy. And there you wake up. In this spiritual dimension between earth and sky, life and death, fire and eternity. This is the spirit and power the music tells you and makes you feel that indescribable Energy, while you pass the space of witchcraft, ghosts, demons and devils.

> 4.You have also covered folklore on previous releases, what are some of the eras of folklore you have covered lyrically?

Yes, we did. The previous release had some traditional folklore about some special tree (The Alder), that had a lot of myths behind it here in germany.

> 5.What are some of the other aspects of the occult that you have an interest in and what are some esoteric topics that you plan to explore on future releases?

That’s a good question, but I don’t know the answer. We will see that, when the time comes for it while creating the future releases. But I think about some more horrifying and darker aspects. From sacrifices to demons in your mind. But this are just a few ideas until now. Nobody knows what it will be in the end.

> 6.Can you tell us a little bit more about the artwork that is presented on the new album cover?

The Artwork for the  knew album is done by our guitarist that founded Boötes Void together with me. It shows a hand holding a tree, that grows out of it. And that combines so much things and also ideas behind it. It’s like a picture for creation and spending live. A harmony of human and nature as well. But also a symbol for human power, cause this hand is always able to crush that tree. A Balance that can be destroyed or grow up. As long as it grows it spends life. When the balance is crushed, it’s the bringer of all death. The Circle Of Life & Death.

> 7.Can you tell us a little bit more about the masks that you wear in the band pictures?

For the masks there are a lot of reasons and also how they look. Boötes Void, the absence of everything and in eternity (If you don’t know it, google that shit, kids!). The Black masks make a 3D effect that makes you think you can watch more deep into… nothing. Just darkness and blackness. And makes you also more look through the person so get more into a spiritual „room“ in your mind. That represents the atmosphere of our music we thought.

And the masks had also been necessary, cause we don’t like that fucking Person and Star culture that went big for some figures in black metal. Cause when you look at this, a lot of bad things are going on into the scene and they are not because of music, the are because you went on and got Idols. Black Metal should always be about music and the darkest feelings in all their different ways. So the masks helps us also to difference from that part of Black Metal. And the bonus about it is, that when you are on stage, wearing a mask, you have to be more like an artist figure and that makes it possible to represent more what the music is about.

> 8.What are some of the best shows that the band has played so far and also how would you describe your stage performance?

We just played good shows until now. But I think about it and also have to speak for the band, we really had some great shows and they all worked good. Some special show on the top I think everyone would say, last year in Munich. It was an awesome show, with awesome bands and a great time. The concert was sold out and in times of corona it was a great experience to be able to play in front of 400 people standing straight before the stage again.

Our performance maybe seems a little bit between a Metal concert on stage and some occult dark theatre. But our performance is still not at the end and we got a lot of thoughts about it, which we will show within the next step very soon. Be curious and let yourself surprise.

Of Course we got plans for 2022. But at the moment we still have to look, what will be possible. The Tour we planed for 2020 is still in the planning to be done as soon as possible and we hope after two years it can finally happen in autumn. Beside that, there will be some single shows and festivals and what will come around when maybe the pandemic is not a problem for it anymore.

> 10.On a worldwide level how has the reaction been to your music by fans of occult black metal?

Until today, the reactions we got, always had been really positive and I think that people always realized (live and while listening) what we want to want to express with our music.

> 11.Are any of the band members currently involved with any other bands or musical projects these days?

Boötes Void was founded as a side project of musicians of our home town. So yes, we got. Some more, some none already. I also got a few bands and do some solo projects as well.

> 12.Where do you see the band heading into musically during the future?

It will always be dark, atmospheric, heavy and fast. Of course like spoken at the beginning of this interview, we got an evolution in our music over the years, but it will always stay pure black metal.

> 13.What are some of the bands or musical styles that have had an influence on your music and also what are you listening to nowadays?

Everyone got it’s influences. I can’t tell you how much influences it had or not, but I think Mgla and Sargeist had been. Always something from the old school Black Metal and some of the complete atmospheric stuff.

> 14.Before we wrap up this interview, do you have any final words or thoughts?

At first I have to say, thank you for your questions, it was an honour to talk about our new album. I’m really curious what will come to us with C.O.L.D. in the future and how the people will like it. So if you took the time, to read all these 13 questions before and like black metal with a great atmosphere, give us a listen and tell us, what you think about it.

Some other thoughts are about the times we are living in. I hope that live culture can return soon. We are really looking to forward to play a lot of shows after these hard times, where you can fallow us into the Void! 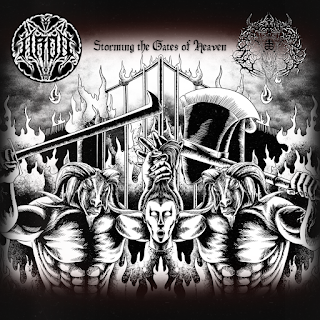 His  side  of  the  split  starts  out  with  some  dark  soundscapes  and  spoken  word  samples  before  going  into  a  heavier  direction.  Melodies  are  also  added  into  some  of  the  guitar  riffing  while  the  vocals  are  mostly  high  pitched  black  metal  screams  and  the  music  is  also  very  heavily  rooted  in  the  old  school  tradition.

Next  up  is  Cruciatus  Infernalis  a  solo  project  that  was  recently  featured  in  this  zine  and  plays  a  mixture  of  black  and  death  metal  with  some  symphonic  and  dungeon  synth  elements. 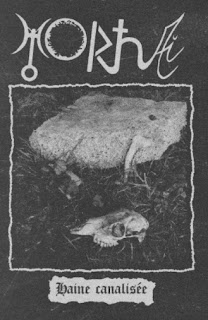 Mornai  plays  a  style  of  black  metal  that  is  very  slow,  raw  and  melancholic  sounding.  The  production  sounds  very  dark  and  raw  while  the  lyrics  are  written  in  French  and  cover  melancholy,  suffering  and  misanthropy  themes.

Listen to the full tape HERE 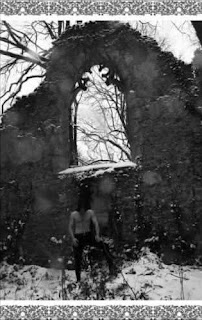 Listen to the full tape HERE 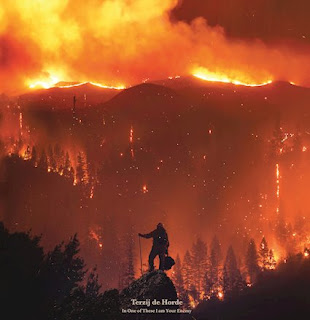