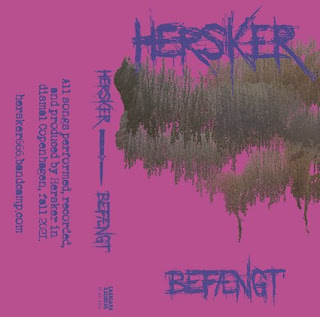 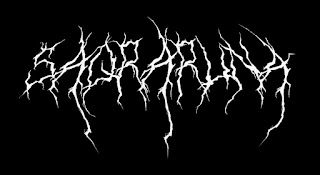 Davenium:  Saqraruna is born in April 2021 in my hands. Basically, and to be honest, it was an impulse that I had kept for many years generated with the thousands of attempts to form a band, to produce it and make it known. I never managed to get the people, the desire and the perseverance to keep it alive. I told myself, I'll try it alone and without help… I recorded the first album “Obscure and Malignant Rituals” in 4 days. I felt that something was missing, it was not complete. It is there where the other members arrive and give all the productions another nuance and, by far, an improvement. Therefore, Saqraruna is Ghoulfist on vocals, Lord Grinder and myself on guitars, and Hastur on bass.

2. So far you have released a full length and an ep, musically how do they both differ from each other?

Hastur: To answer that question, let's situate ourselves in the concept of our first production “Obscure and Malignant Rituals” (2021).

Psychological terror is the main theme of our first album, infested with disastrous melodies, harmonies and well-crafted atmospheres in which the guitars play an extremely important role in achieving it.

Now, our Ep “An Altar to the Nameless Entity” (2022) recounts the events that gave rise to the Obscure. As all inception is raw, we wanted to put more emphasis on giving it a more 'primitive' sound and vibe. The composition of the themes is maintained.

Now, our second EP is coming (March-2022): “Ayar Betrayal”. Here we take a turn on the lyrics and music. We have incorporated pre-Hispanic rhythms and the lyrics are now focused on Inca mythology as the foundation of the largest empire in South America, while preserving the twisted atmospheres and aggression that characterizes us. “The Ayar Betrayal” will welcome you to our second production to come out: “Under the Light of Mountains”, a twisted chronicle of our Inca history.

3. Some of your lyrics cover the pre-Hispanic Pagan era of Peru, can you tell us a little bit more about your interest in this topic?

Ghoulfist: At the beginning - first two releases - we lyrically developed a particular mythology that allowed us to explore and delve into the darkness of the soundscape that was composed.

However, from the beginning (as the name of the band suggests), our interest in revaluing native themes was shared. We believe in the possibility of connecting the history of the cultural massacre to which our ancestors were subjected by the conquerors and the vindication of some myths and features of our historical identity, with the sound that we are proposing as a band and that both fronts are enriched in favor of the final result of our work.

4. Hat are some of the other lyrical topics and subjects the band has explored so far with the music?

Ghoulfist: At the beginning - first two releases - we lyrically developed a particular mythology that allowed us to explore and delve into the darkness of the soundscape of the compositions through stories about beings related to nature, time and death.

5. What is the meaning and inspiration behind the name 'Saqraruna'?

Hastur: Saqra is a word of Quechua origin that would be translated as evil/perverse. Runa is people. If we put this together, it would lead us to a sinister concept where we want to demonstrate that evil and darkness is part of our culture conceptualized in anthropomorphic and/or mythological creatures and that is part of our identity.

It is where the name of the band is formed, in which we carry evil and paganism in an archaic and atavistic way in our songs.

6. Can you tell us a little bit more about the artwork that is presented on the ep cover?

Davenium: The photo is about the Pisac-Cusco’s ruins from Peru. Pisac is located at the eastern end of the Sacred Valley of the Incas. In the century XVI, after the arrival of the Spanish people in Cusco, Pisac was invaded and its people fled. Its main monuments were damaged. The Inca cemetery was destroyed and looted. One of his best-known stories is that of a single statue that tells an Inca legend, in which the chief of the town: Huayllapuma had a daughter, called Inquill, whom he had to marry to the man who could build, in just one night, the bridge over the Vilacmayo river (a bridge of great importance for the shelter and defense of the place). Despite everything, Asto Rímac (a prince) decided to accept the challenge. With it, she would marry Inquill. The local authorities arranged everything so that Asto Rímac began the work, while the princess had to climb a hill without turning around; because otherwise she and her fiancé would turn to stone. Almost at dawn, the prince had completed the work, but Inquill, unable to bear the blazing sunlight any longer, turned and remained turned to stone to this day. For this, the name of the album: “Under the Light of Mountains”

7. Do the band members have any plans for live shows in the future?

Ghoulfist: Being a band with a pandemic birth certificate, there are certain conditions that have to be met, such as the time to coordinate and in our case, get a drummer, but above all the possibility of replicating the sound that we have achieved... if conditions are met, it could be considered. In a strict sense we are a studio band, but it is not ruled out.

8. The new album was released on 'Super Sargasso', how did you get in contact with this label?

Ghoulfist: Super Sargasso is a serious and close label, with which some of us already had contact for previous projects. Precisely because of that closeness there was trust and interest in working together.

Ghoulfist: So far we have read good reviews and thanks to the digital world and its indicators we could say that there are people interested in our work, which is relatively motivating: it is not the reason for what we do, but it is satisfying.

10. What is going on with some of the other bands or musical projects these days that some of the band members are a part of?

Ghoulfist: Currently in my case there are several works in progress: Incantamentum's debut album and AntiPröphet's EP came out at the end of last year, Crown of Worms' second album is about to come out under Super Sargasso as well; two splits are coming up with unreleased material from Motherfog, and we're in the pre-production stage for Ghoulfist, Despoil, NDR and something new from AntiPröphet, between this and next year.

Hastur: To tell you the truth, that each job we do is 'differently the same', I can tell you that in substance it´s Saqraruna.

We will probably incorporate new instruments to give it a rich sound in the atmospheres depending on the concept of the album.

But who knows, you will hear something new from us and a dimensional door to new cosmic horrors will open for you.

The demons are in the detail and that is what we are heading for.

Davenium: To tell the truth, although I listen to a lot of music, I don't think I have a direct influence on the style we do with Saqraruna. What I can mention are some bands that I often listen to that indirectly got me into this project: Ildfar, Ethereal Shroud, Drudkh, Olhava, Këkht Aräkh, Korpituli, among others.

Thank you for giving us a space for people to get to know us better and the people who follow us on digital networks and platforms.

Thanks for the interest and support of the band's work, we hope to continue producing material worthy of it. Greetings. 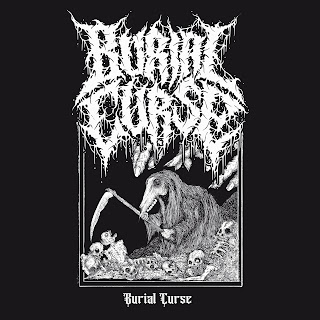 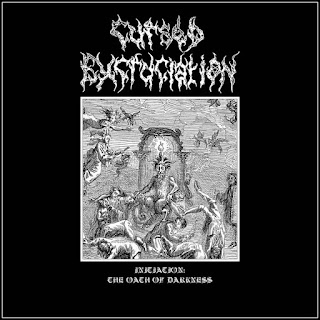 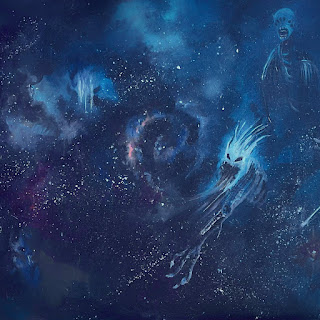 On  this  recording  Nihilum  remain  true  to  the  aggressive  and  melodic  style  of  black  metal  that  they  have  established  on  previous  releases.  The  production  sounds  very  raw  and  heavy  while  the  lyrics  cover  the  story  of  an  alien  species  and  their  quest  for  structural  domination.